#Expert – Blog Series: How to create a gender-just healthy planet

The fight for chemical safety in Africa is complicated by many factors. First is the fact that many chemicals do not cause instant visible harm, damage or death. Chemicals are silent operators. In a continent where there are a number of other causes of instant harm, damage and death such as mosquitoes, wild animals and pathogens effects of chemicals are not prioritized. Other factors that complicate the fight for chemical safety are culture, poverty, high rates of illiteracy, aggressive marketing by the industry, lack of expertise, poor policies and enforcement of legislations.

There is no group that is more affected than women and children, in particular working women, and the flower sector shows the typical problems.

The Flower Sector, Women and Chemicals in Africa

Kenya was the first country in Africa to develop the flower sector and it was followed by Tanzania, Uganda, Zambia and Ethiopia. Flower production shifted from Northern developed countries to Southern developing countries due to lower health and environmental standards in the South, availability of sunshine, free land and water. Labor costs are also much lower. But production of flowers requires intensive use of chemicals and plastic sheets. This increases the risk of exposure to hazardous chemicals to women. Why women? Because the flower industry is feminine! In general, flower production employs 80 % women, particularly girls of ages between 16-28 years. Why? There is a silent belief that flowers require tenderness in their production, and women are linked to tenderness. However, behind this there are hidden reasons!

In Africa, women are less educated and are therefore paid less than their male counterparts. In Africa, women are brought up to become obedient and less argumentative especially in front of men (though the workforce is feminine almost 90% of supervisors in flower farms are men!). When you are paid less and expected not to speak out the possibility of exposure to chemicals increases. For example, low salaries force women in the flower sector to work longer hours in order to earn overtime pay. Women also don’t ask for personal protective clothing (PPE) as doing so will be regarded as being argumentative, which is against culture and tradition.

Women in the flower sector are more exposed during high demand seasons in the developed countries i.e. during Valentine, Mother’s Day, Christmas and Easter. Ironically it is fellow women in developed countries who are the main consumers of flowers during these periods! The more the demand in the North, the higher the rate of exposure in the South. Cases of instantaneous abortions, nausea, loss of consciousness, etc. are not very uncommon during these periods, particularly in the green houses and grading rooms.

In order to address the situation a group of NGOs and Trade Unions established the International Cut Flower Code of Conduct (ICC). This code mainstreamed gender and chemical safety issues and was used by many   programs including the Fair Flowers Fair Plants Program (FFP – Netherlands, see also their benchmark document for label certification), the Flower Labelling Program (FLP – Germany; not active at the moment), Max Havelaar – Switzerland), The Kenya Flower Council and the Ethiopian Code for the cut flower industry.

Mainstreaming gender and chemical safety in codes of practice for each industry or occupation is the best way of protecting women, girls and children. In my view, all international programs including SAICM, Paris Climate Agreement, Agenda 2030 and others should design appropriate codes of practice or provide guidance to stakeholders rather than just mentioning gender issues in their texts. To me, just mentioning or acknowledging the gender dimension is not enough; it is artificial mainstreaming. Real mainstreaming requires more than text!

Dr. Yahya Msangi is the International Tech Adviser for Sustdev, Climate Change and Chemical Safety at the Youth NGO “Welfare Togo”. His profession is Environmental Resource Management and Occupational Safety and Health with work experiences in Agriculture Land use Planning, Farm Management, Workers Unions and the Global Pesticides Project.

More information about Welfare Togo and their work you can find on their website: https://twelfare.wordpress.com/, or you can contact them via E-mail: togowelfare(at)gmail.com

“Healthy [environment] [planet], healthy people!” – This is the vision with the most support for a new international framework on chemicals and waste management beyond 2020.

And we agree: this vision can be a strong statement for the future.

Health is defined as “a state of complete physical, mental and social well-being and not merely the absence of disease or infirmity” (WHO 2006). We all know that this is not the case for everyone around the world, nor for our planet. One reason are massive gender inequalities, manifest in every dimension of sustainable development. The 2030 Agenda for Sustainable Development recognizes that gender equality is central to this transformative vision as an important goal in itself and as a catalyst for progress across the entire Agenda (UN 2015). Therefore, it is crucial to integrate a gender perspective into the implementation and monitoring of all the Sustainable Development Goals and UN Institutions working on them (UN Women 2018) – including in chemicals policies.

In short, there are three main reasons why gender is an issue for chemicals policy:

SAICM has an agreed Overarching Policy Strategy (OPS) that sets out the scope, needs, objectives, financial considerations underlying principles and approaches, and implementation and review arrangements of SAICM as a platform and process. The OPS underlines the specific importance of women as stakeholders and their still evident lack of representation in the implementation and decision-making processes for the sound management of chemicals and chemical safety (SAICM 2012).

Yet, specific knowledge on differentiated and long-term effects of chemicals on women and men is still lacking. Most delegations and stakeholders are not aware of the knowledge we do have. Comprehensive gender analysis of chemicals and waste management is lacking even more. Like in many other areas, we need to increase research to obtain 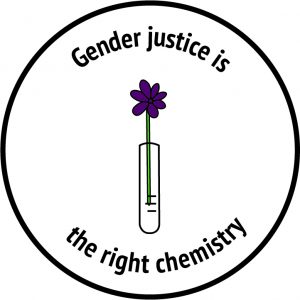 sex-disaggregated data, analyze gender roles and identities and how they impact our interactions with chemicals and waste along the whole life cycle. But how to go about that?

Blogs with experts and explanations

With our new blog article series, we want discuss how we can create a gender-just healthy planet and demonstrate the potential of gender mainstreaming into chemicals policies. There will be a brief article every two weeks.

P.S.: If you would like to join the group of blog authors, let us know! We’re happy to include your article in the series. Pls email anna.holthaus(at)msp-institute.org

SAICM (2012): SAICM Texts and Resolutions of the International Conference on Chemicals Management. http://www.saicm.org/Portals/12/Documents/saicmtexts/New%20SAICM%20Text%20with%20ICCM%20resolutions_E.pdf

UN (2015): Transforming our world. The 2030 Agenda for Sustainable development. https://sustainabledevelopment.un.org/content/documents/21252030%20Agenda%20for%20Sustainable%20Development%20web.pdf

WHO (2006): Constitution of the World Health Organization. http://www.who.int/governance/eb/who_constitution_en.pdf

This year, gender was an issue high on the agenda of the meeting of the Subsidiary Bodies of the UN Framework Convention on Climate Change, which took place from 30th April – 10th May in Bonn, Germany. I attended the event on behalf of the MSP Institute to observe the UNFCCC negotiations and the Women and Gender Constituency active at the climate meetings, and to take away lessons learned for our work on integrating gender in SAICM Beyond 2020.

The In-Session Workshop on Gender, the Gender Dialogue and several side events on gender and climate change provided insights and inspiration. I also talked to delegates about their experiences and asked them what their recommendations for other processes might be.

Gender and the UNFCCC 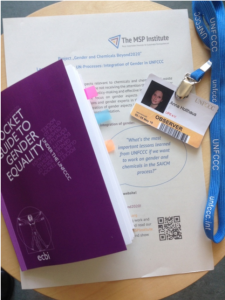 When women’s groups and gender experts started talking about gender and climate change in the 1990s and then with growing force in the early 2000s, there was rather little response. But in the last few years, the UNFCCC has made major strides towards the integration of gender in its decisions:

Several gender-related events at the meetings in Bonn fostered exchange about the first experiences with the Gender Action Plan between Parties, the Secretariat, UN entities and women’s groups. Parties reported about their nomination of national gender focal points for the climate negotiations, workshops on gender and climate change held by the Balkan States and the Dominican Republic, and experiences with gender budgeting by Mexico and Canada. Parties were particularly pleased with the strengthened (or in some cases first ever) cross-ministerial collaborations as part of the gender mainstreaming process. UN and UNFCCC entities reported about gender trainings for their staff members and successful collaborations with the gender experts of the Women and Gender Constituency, which is one of the nine observer groups accredited to the UNFCCC, with 27 civil society organizations as members. Moreover, women and gender organizations like GenderCC – Women for Climate Justice presented new tools for gender analysis and gender impact assessment and discussed with Parties how they can be used effectively.

However, despite these encouraging events some gaps and challenges seem to remain: often, sustainable funding for gender mainstreaming is missing. In many instances, gender issues are limited to women’s vulnerability and participation rate – which is of course important, but definitively not enough. This is demonstrated by a gender analysis of the INDCs submitted by countries, undertaken by WEDO in 2016.

Nevertheless, the positive mood among participants at the gender events shows that a major step has been taken with the Gender Action Plan and that there is political will, even if this has to be pushed continuously by women and gender activists.

What to learn for SAICM?

In SAICM, we are further along in some respects. But we don’t have to reinvent the wheel. The experiences of the UNFCCC and their process of integrating gender shows:

By the way, the BRS Convention was mentioned as especially progressive several times during the days in Bonn: the BRS Gender Action Plan was developed in 2013, women’s participation rate is high and 91% of the initial National Implementation Plans analyzed include women and gender keywords (see IUCN 2017).

A framework on chemicals and waste management beyond 2020 should not lag behind this kind of standard! The next two years present a unique window of opportunity to integrate gender, and do it on the basis of what we know may work in terms of generating knowledge, building capacities, and getting powerful policies implemented.

–> Take a look at our policy suggestions for gender in SAICM Beyond 2020.

Only with gender justice can there be a healthy planet for all!

PS: Many thanks to LIFE e.V. and GenderCC for your support and the possibility to attend these inspiring meetings!