The HLPF  is United Nations platform for follow-up and review of the 2030 Agenda for Sustainable Development and the Sustainable Development Goals (SDGs). This year’s theme was ‘Transformation towards sustainable and resilient societies’. SDG 12 “Responsible Consumption and Production”, dealing explicitly with the management of chemicals and waste, was among the individual SDGs under review this year. That’s why the MSP Institute attended HLPF2018 to work together with other women’s groups and feminists of the Womens Major Group (WMG) to increase attention, inter alia, to gender and chemicals issues.

The WMG was created at the 1992 Earth Summit and is an official participant in the United Nations processes on Sustainable Development. With over 600 members it is responsible for facilitating women’s active participation, information sharing and input into the policy discussions at the United Nations. 180 WMG members attended HLPF 2018, meeting daily and advocating for feminist positions (see the WMG Position Paper, with a special section on SDG 12, p12). In addition, we took part in the daily WMGs social media campaign #FEMINISTDEMAND (see our tweets) and special protest actions against the killing of environmental defenders in Colombia.

There was a lot going on regarding chemicals and waste at HLPF: The goal of creating a global circular economy was a significant topic in the review of SDG 12 (see ENB Report), the European Commission presented the first European strategy for plastics, the German government held a side event on SAICM Beyond 2020 and Sweden launched the high ambition alliance on chemicals and waste. So it seems that things are moving – yet the interlinkages with gender issues received little or no attention, presumably often due to a lack of awareness. There is a long way to go to increase awareness of gender aspects of chemicals and waste management, and we hope that the SAICM Beyond 2020 process can contribute to laying foundations for gender justice in chemicals and waste management in the future. 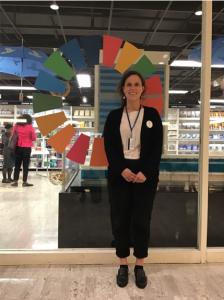 The HLPF itself concluded by adopting a negotiated, but not legally binding, Ministerial Declaration. This reaffirms Member States’ commitment to realizing the 2030 Agenda and leaving no one behind – but did not move beyond already agreed language. Quite the contrary, Russia called for a vote on a paragraph affirming gender equality, aiming to weaken language there, and the US and Israel declined the Ministerial Declaration as a whole. These instances illustrate how the global consensus on the 2030 Sustainable Development Agenda can be undermined in times of globalizing nationalism.

For us, the trip to HLPF was still worth it: we made quite a few new contacts, had intense discussions with colleagues, and shared information about gender in chemicals and waste management with many governments and stakeholders from around the world.